5 Success Principles I Learned From a Lame Sheep 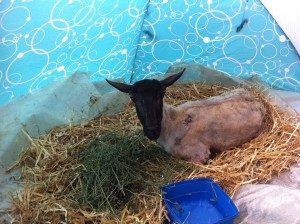 What qualities do we need to uncover within ourselves to become successful comics creators? Sometimes you can find inspiration and the answers by observing nature.

I live and work as a comics creator on a farm on the outskirts of Sydney, and among the many animals I look after is a small herd of sheep.

One evening not that long ago, I noticed that Poppy – a young ewe – was hobbling slowly back to the sheep yard. The next morning when I let the sheep out of their pen, she sat on the ground, refusing to get up. When I tried to lift her, she collapsed.

I promptly called out the vet to examine her. The prognosis was not good. Despite the fact that Poppy grazed all day, she was anaemic and had lost an enormous amount of weight so that she was positively skeletal under her thick fleece. Apparently it is a common mistake to judge a sheep by appearances because when I ran my hands over her body all I felt were her bony ribs and hip bones. Even though I drenched (wormed) the sheep on a quarterly basis, the vet drenched her with a new solution, gave her a shot of iron, as well as some B vitamins. The vet was sombre throughout the treatment. She quietly explained that she didn’t think Poppy would make it beyond a couple of days, gave her a five percent chance of survival, and thought it best that Poppy be euthanised.

I felt enormously guilty that I had missed Poppy’s symptoms and I went through an agonising decision-making process during the next few minutes. I knew that Poppy “on her last legs” so to speak and didn’t have much strength left. I also knew that if I attempted to rehabilitate her, then it could potentially prolong her suffering. But it was Poppy who made the decision for me. Which brings me to the first lesson:

(1) A fighting spirit is everything

Despite the fact she was weak and malnourished, Poppy had a bright fierce look of determination in her eyes. It was as if I could see her fighting spirit, and it made me believe she had the potential to return from the brink. I made the decision to give her every chance possible and told the vet that I would look after her. I promptly brought her some food and she got stuck into it, which validated my decision and made me think she was going to just get on with things whether she was crippled or not. She had a real will to survive.

Over the next few days, her wool started falling out in chunks. By the time the shearer came a week later, half of her fleece was missing. He told me point blank to put her down her because she wasn’t going to make it. A week after that Poppy was completely bald all over her body and I had to cover her thin fragile chamois-like skin with a towel so she didn’t tear it on the ground when she moved, or when I rolled her onto a plastic sheet to get her undercover into the pen when it rained.

I also had to keep moving her and exercise her limbs because she began developing bed sores (open wounds) on her joints and chest. A couple of weeks later, I moved her closer to the house into a small yard so that I could keep a closer eye on her. I also pitched a beach sun shelter to she would have some cover from the elements. In all that time, there was something about Poppy that made me determined to keep going… and that was her indomitable spirit. It was so palpable I could feel it.

If I was to get Poppy up and walking again, I would need to put her on a healthy eating plan–I picked a bag of fresh grass every day, gave her a serving of lucerne hay and sheep pellets and made sure she had the choice of vegetable scraps and fruit from the house. I also found an animal nutritional supplement made of molasses, protein and oilseed, fish oil and a full spectrum of vitamins and minerals similar to what humans need to make their bodies and minds function at peak effectiveness. The product lived up to its marketing message – “brilliant coats, ‘cool’ energy, appetising treat, palatability enhancer” – because within weeks she began filling out, developed a little tummy again and miracle of miracles, began to grow wool again.

A healthy eating plan gave her energy and sustenance for the long haul.

About six weeks into rehab we came across a major obstacle. I greeted Poppy one morning only to find she was morose – her eyes were morose and had lost their sparkle. She also refused her food. I called the vet out again who was amazed that Poppy was still alive and just kept looking at her in wonder. We discovered a hidden wound on the inside of one knee that had become badly infected and had therefore compromised her immunity. The vet gave her an antibiotic injection and told me I was to do the same for the next five days.

This wasn’t Poppy’s fear to face this time… it was mine. I was scared but I listened carefully to the vet’s instructions and watched the procedure. Over the next five days, despite my fear, I plunged that needle into her flank once a day. It was a very proud moment for me. I also tended all of Poppy’s wounds daily. I even cleaned up several disgusting abscesses which I am also very proud simply because I had always had an aversion to anything green, brown or yellow that oozed from any human or animal body.

As a consequence of facing my fear of giving her a needle, I felt I had grown up and emotionally matured. I also felt that this challenge was transferable to other areas of my life.

I had been told by several people that once a sheep was down for more than three or four days, its muscles would deteriorate and it would never get up again. Yet every day I interacted with Poppy, I witnessed her trying to get up, and every day for about six week, she would fail. The most she could do was get her front legs out straight but she didn’t have the strength to stand up on her back legs up including the injured one that was bandaged. However, she did manage to slide and kind of throw herself around various parts of the pen, as well as move in and out of the shade when she needed to.

Every day I massaged those legs and put them through a series of exercises and movements. I also tried a rehab trick on the recommendation of the vet. I’d put a towel around her middle and pulled her up so that she was standing upright with only a little bit of weight on her legs. Every time I did that I praised her and gave her a reward of her favourite treat—sheep pellets.

One morning I walked out and I heard a bit of a scuffle and when I turned the corner she was standing upright by herself and looking at me proudly. That was an emotional moment for me and I praised her and gave her a big hug and big handful of pellets.

After that she began getting up several times during the day, partly to show off to me and partly because she obviously wanted to walk again. It was absolutely incredible.

The upshot is that Poppy eventually began to walk again, albeit on three legs because her injured leg has healed into a tight ball at the knee joint and she couldn’t extend her leg completely to the ground. She now gets up and down at when she feels like it and walks around She is cocky and cheeky and in all respects she is exceptionally healthy. The vet was blown away by the fact that Poppy had defied the odds and proved all the naysayers wrong. And that’s because she never gave up.

(5) Commune with your herd

Sheep are herd animals by nature but Poppy became isolated during those eight weeks of rehab. She ate and lived by herself and was fine with it and so I started letting her out of the pen so she could graze.

Then one day I went out to look for her and she had disappeared. I frantically searched all her favourite spots and couldn’t find her. I needed to lock up all the other sheep in the night so I headed to the other side of the farm to close off the pen… and that was where I had found her. She had returned to the herd and was ready to join them again.

We all need to seek out our herd every now and then to engage socially, to swap ideas and to connect.

Poppy is an amazing creature. She believed in herself, overcame all manner of obstacles, and can now walk and run. There is a commonality in our experience even with animals because we are human animals. You can use the same success principles Poppy brought to her own healing to your own personal or business life. These are the same qualities you can bring to the forefront to help you reach your goals and mould you into a champion.